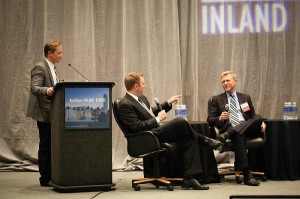 ONTARIO, CALIF. 1/29/15—Brandon Sudweeks, President of Coldwell Banker Commercial Sudweeks Group participated in RealShare Inland Empire last Thursday. The event was held at the City of Ontario Convention Center and the focus was on commercial real estate trends in the Inland Empire.

Sudweeks participated by functioning as a moderator for a panel of real estate development professionals that discussed the outlook of land values in the area.

“As the drive for development in the Inland Empire ramps up, land prices are heading north and developers are becoming more sophisticated with the capital stack,” an article produced by GlobeSt.com, said. “What’s more, there’s so much capital looking for deals that developers can afford to re-jigger the capital stack, they said during the ‘Development Update’ panel.”

“The outlook for the Inland Empire’s commercial development is bright,” Sudweeks said. “I expect to see a steady increase in the infrastructure of this area, as businesses are looking to move out of the large metropolitan areas of LA and San Diego while still maintaining reasonable proximity to large markets.”